New report finds substantial variation in awards from the 34 cases that went to trial between 2006 and 2018.

Boston—The number of appraisal petitions filed in the Delaware Court of Chancery continued to fall in 2018. Appraisal petitions, in which shareholders challenge the deal prices in proposed acquisitions, have been steadily declining since peaking in 2016, according to a new report issued today by Cornerstone Research.

The inaugural edition of Appraisal Litigation in Delaware—Trends in Petitions and Opinions, 2006–2018, shows that shareholders filed 26 appraisal petitions in the Court of Chancery in 2018, a 57 percent decrease from 2017 and down significantly from the high of 76 actions in 2016.

Our findings show that the Delaware Courts place a strong emphasis on whether the merger was the product of a robust, arm’s-length sales process.

In the 34 appraisal cases that went to trial during the 13-year period, there has been considerable variation in the Court of Chancery and Delaware Supreme Court opinions. Premiums to deal price awarded ranged from negative 57 percent to positive 158 percent. Several recent decisions, including In Re: Appraisal of Dell Inc. and In Re: Verition Partners Master Fund Ltd. et al. v. Aruba Networks Inc., have highlighted judicial concerns about the quality of the sales process and the appropriate methodologies used to evaluate fair value.

“Our findings show that the Delaware Courts place a strong emphasis on whether the merger was the product of a robust, arm’s-length sales process,” said David Marcus, a Cornerstone Research senior vice president who coauthored the report. “For transactions in which the target company was allowed to solicit competing bids, the average premium to the deal price awarded was 1 percent.”

Cornerstone Research vice president and coauthor Frank Schneider added, “The use of market prices of shares over deal prices in recent decisions appears to have affected the methodologies used to determine a deal’s fair value. We expect the Delaware Courts will provide more clarity on these issues in 2019 and beyond.” 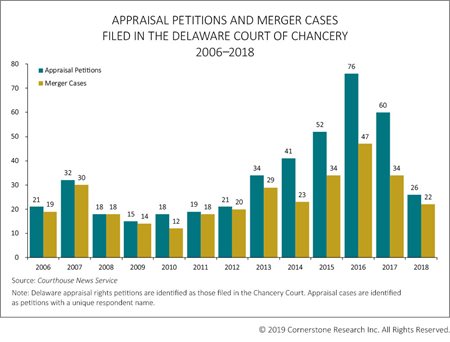 Appraisal Litigation in Delaware—Trends in Petitions and Opinions, 2006–2018

The number of appraisal petitions filed in the Delaware Court of Chancery continued to fall in 2018.

Shareholders of public target companies challenged 82% of merger and acquisition deals valued over $100 million in 2018, consistent with the previous year.

Cornerstone Research, in cooperation with the Stanford Law School Securities Class Action Clearinghouse, publishes a series of reports on securities class actions filed after the passage of the Private Securities…

Back to Top
We use cookies on our website to give you the most relevant experience by remembering your preferences and repeat visits. By clicking “Accept,” you consent to the use of all cookies.
Do not sell my personal information.
Cookie Settings Accept
Manage consent

This website uses cookies to improve your experience while you navigate through the website. Out of these, the cookies that are categorized as necessary are stored on your browser as they are essential for the working of basic functionalities of the website. We also use third-party cookies that help us analyze and understand how you use this website. These cookies will be stored in your browser only with your consent. You also have the option to opt-out of these cookies. But opting out of some of these cookies may affect your browsing experience.
Necessary Always Enabled
Necessary cookies are absolutely essential for the website to function properly. These cookies ensure basic functionalities and security features of the website, anonymously.
Functional
Functional cookies help to perform certain functionalities like sharing the content of the website on social media platforms, collect feedbacks, and other third-party features.
Performance
Performance cookies are used to understand and analyze the key performance indexes of the website which helps in delivering a better user experience for the visitors.
Analytics
Analytical cookies are used to understand how visitors interact with the website. These cookies help provide information on metrics the number of visitors, bounce rate, traffic source, etc.
Advertisement
Advertisement cookies are used to provide visitors with relevant ads and marketing campaigns. These cookies track visitors across websites and collect information to provide customized ads.
Others
Other uncategorized cookies are those that are being analyzed and have not been classified into a category as yet.
Save & Accept
Powered by